If you were lucky enough to snag tickets to the sold-out run of A Christmas Story: The Musical, you were no doubt impressed by the performance of lead actor Matty Ward as Ralphie Parker. New to the Four County stage, Matty and his family dove into life at the theater, participating backstage, attending work days, and joining as members. They’ve thrown themselves into helping however they can, whether it’s staffing the Bistro, assisting backstage during shows, or just schlepping garbage to the dumpster.

StageWrite caught up with Matty’s dad, Jeff Ward, to hear more about one of the central Virginia families behind our portrayal of one of America’s most beloved fictional families. 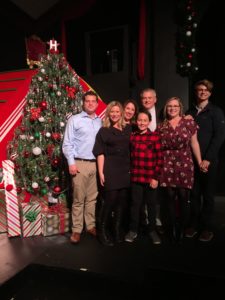 Tell us about your family.

Matty has two older sisters who are 28 and 29.  Chelsea, 29, lives in NYC and works in financial services.  Amanda, 28, lives in San Francisco with her husband and works in Development for a Non-Profit.   Karen was born in Chile and raised in Australia.  Karen is a certified Interior Designer and owns her own business, Karen Ward Interiors.   Jeff attended UVA on a Navy scholarship and flew fighters in the Marine Corps.  He is now in software sales for IBM.  Matty is a sixth grader at The Covenant School in Charlottesville.   He is a great student and besides his love of the performing arts, he is a competitive swimmer and soccer player.  And we have the a big, beautiful golden retriever named Lady!

Tell us about your involvement with Four County Players.

Our first exposure to 4CP was just this summer when we saw The Addams Family: A New Musical.  We were blown away by the quality of the performance, the sets, costumes, the venue … just the whole experience.   After that, we were excited to be more involved in some capacity. 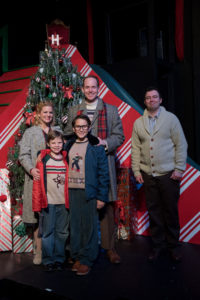 The Parker Family A Christmas Story 2017

Matty’s piano teacher at the Music Education Center in Charlottesville recommended he look into auditioning for future shows after seeing him as Scuttle in his school’s performance of The Little Mermaid.   We figured, what better way to become more involved in Four County Players than becoming part of one of the shows!

Describe the scene like at home when Matty discovered he’d been cast in the lead role?

We saw director Geri Sauls’s email early in the morning as we were getting ready for school.  We woke Matty up to read the email, so he was a bit bleary-eyed.   As it sank in, he got a big smile on his face, threw himself back on his pillow and his hands in the air, and gave a loud “Thank you, Jesus!”

Why did you choose to become members of 4CP?

We were Season Subscribers to the Pantages in LA when we lived in Southern California, and Matty’s sister, Amanda, was a member of the Laguna Beach Youth Theatre Conservatory for many years.  We loved being part of that organization and missed being connected to a theater family.  It took us about two minutes to feel right at home at 4CP, so we were very excited to become members.

The whole experience of rehearsals, set building, tech week and the performances has been so much fun and the people so friendly, funny and helpful that we look forward to being part of 4CP for many years to come.  We are “theater people,” so we feel it’s important to support local theater. But becoming a member of 4CP makes membership even more special by adding in the camaraderie, teamwork, and friendship of working together towards a common goal of putting on quality shows.

I cannot say enough about the amazing people we have met during A Christmas Story!   We are really going to miss the cast, the crew, their families, the volunteers and everything about this experience, so we look forward to staying connected as new members of Four County Players.   We can’t wait for the next show that we can be part of!