The Annual Meeting of the membership of Four County Players took place on June 15, 2020, held via Zoom. In the midst of the social isolation caused by the coronavirus pandemic, it was wonderful to gather virtually with our theater community to talk about regular theater business.

As I look back at the 47th season at 4CP, it’s hard to believe that so much happened in our shortened season. Five shows were produced, starting with our exciting Return to the Ruins for  A Midsummer Night’s Dream. Being back at the Barboursville Vineyard was an amazing experience for old-timers and newer members alike. I’d like to extend a special congratulations to the brain trust behind Midsummer: Lydia Horan, Linda Zuby, Kim Dukes, Rachel Vere Nicoll, and Kristen Heiderstadt, Gary Warwick White, and Wendy Novicoff.

We had two knockout Cellar productions in the season, with The Savannah Sipping Society in the fall and our Teen Arts Production of Dear Edwina in February.  On the Mainstage, Irving Berlin’s White Christmas had the honor of being the first show to take advantage of our new backstage scene shop. It was performed for packed houses for the full run. The Mousetrap, a thrilling Agatha Christie mystery, brought our season to an unexpected end when we had to shut down mid-run in response to the growing pandemic. 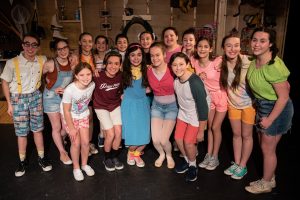 The Cast of Dear Edwina

In all, we sold approximately 3,000 tickets for Shakespeare at the Ruins, and another 4,672 for the rest of the season, for a total of 7,672 tickets sold. We were sad to be forced to cancel Cellar in Blue and Mamma Mia! but hope to put those shows back on the schedule sometime in the future.

While we were busy frolicking with fairies in the boxwoods, the theater building was undergoing a transformation with the construction of our backstage addition! After four years of fundraising and sometimes agonizing planning, construction progressed smoothly through the summer so that we were ready to start using the space in September. Read the blog post If you’d have been there for more on that story. I would like to give special thanks to the BABs use committee that met in August and September to make plans for moving into the space, so that everything was ready to go for White Christmas set builds by late September. In total, we raised $314,334 through our capital campaign, and the construction cost $330,589. We were able to get a loan from VNB of $25,000 to cover the difference. 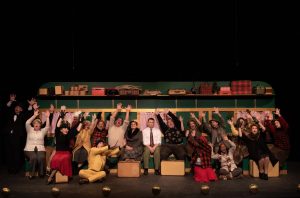 Other noteworthy events in the life of the theater this year included the stripping and refinishing of the stage floor,  a project taken on by Kristen Heiderstadt and crew. We also had an unexpected staff change, when Victoria Clement moved away in January. We have been fortunate to hire Jennifer Phelps to take her spot, just in time to deal with the chaos of canceled shows and ticket exchanges. Between the two of them, Victoria and Jennifer worked on getting the theater database records transferred to a new integrated ticketing/membership system (Vendini); we have confidence that our record-keeping will be improved once we have completed this transition.

In mid-March, we had a wonderful Season Reveal event where all of the shows for the upcoming season were previewed. Two days later, the coronavirus pandemic meant closures and stay at home orders,  and plans had to be put on hold. Though we initially made temporary decisions, hoping that the situation would change after a few weeks, it became clear by early June that long-term plans were needed. As a result, the Programming Committee, with the support of the full board, made the difficult decision to postpone the full Season 48 schedule. Some shows (particularly our big musicals Elf and Cinderella) will be rescheduled in the 2021–2022 season. Other shows—either those previously announced or new, more suitable options—will be filled in based on the best information about the safety of  public performance at the time. The first of our socially distanced productions, David Ives’s All in the Timing, will open in late August. A Reopening Committee has been formed to review all aspects of bringing an audience safely to the theater, and this production will give us a chance to see what it’s like to do theater in this very uncommon era.

I am very grateful to my fellow board members, who have been particularly supportive this spring when so many difficult decisions needed to be made. This year, we are saying thank you and goodbye to board members Jim McConnell, Robert Eversberg, and our long-serving board secretary, Linda Hogan. We are also excited about the new members joining the board after this year’s elections at the annual meeting: David Merriman, Charif Soubra, and Karen Schlicht.  Scott Bates, Elaine Fogliani, Anna Grey Hogan, Meg Hoover, Wendy Novicoff (treasurer), Debbie Owen (president), Carl Schwaner,  Hannah  Vidaver, Jeff Ward, Connor Wells (youth representative), Tres Wells (vice president of arts), Edward Warwick White, and Gary Warwick White remain on the board. 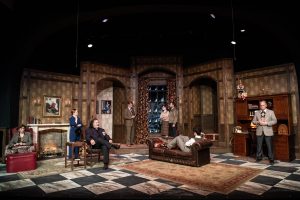 When the shutdowns started happening in March, and we faced one cancellation decision after another, I was very thankful for this supportive community that understood the painful process we were going through. I am also thankful that we continue to operate with very low overhead, meaning that our cash reserves should carry us through several months of being closed if needed. We now have a plan for getting through the next six months or so, which includes maximum flexibility to react to the ongoing restrictions. Theater may look different in the short term—or even the long term—but I am confident that whatever it looks like, Four County Players will still be here to keep making theater happen. 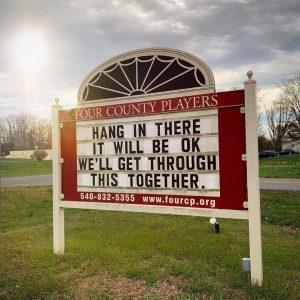