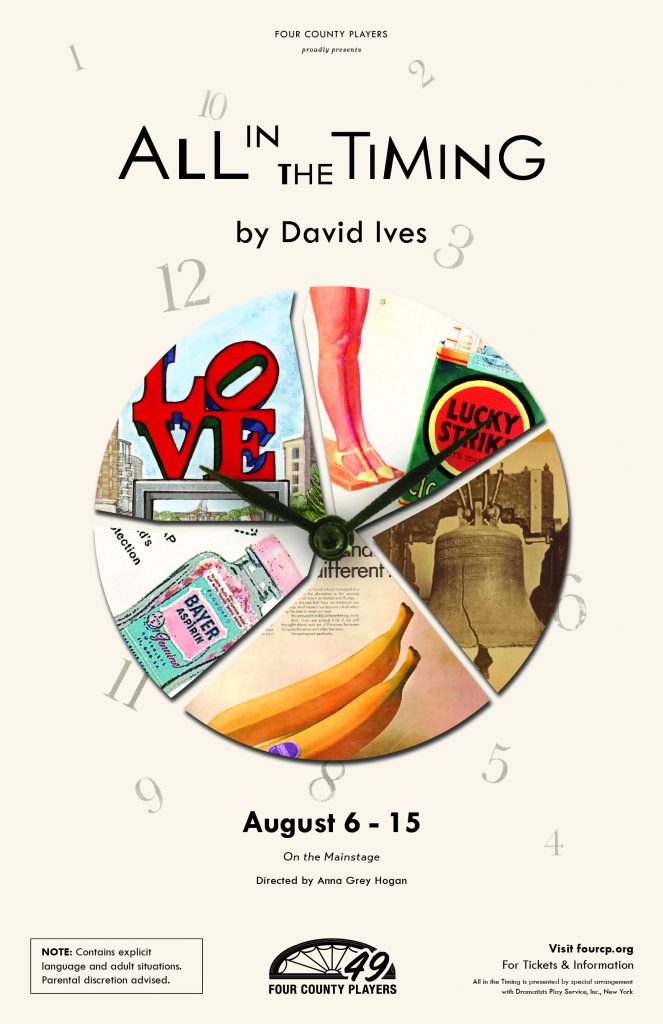 All in the Timing

After postponing this show in summer 2020, Four County Players is thrilled to bring ALL IN THE TIMING by David Ives to the Mainstage! This is a critically-acclaimed, award-winning collection of short comedic plays that combine wit, intellect, satire, and just plain fun. We will be presenting three of these hilarious pieces as a one-act show: In THE PHILADELPHIA, a man struggles with and later overcomes the worst day ever. In SURE THING, two people meet in a cafe and find their way through a conversational minefield of false starts, gaffes, and faux pas on the way to falling in love. In WORDS, WORDS, WORDS, three writers attempt to recreate one of Shakespeare’s greatest works. Make plans to join us for an evening (or afternoon!) of laughter–seating is limited, so reserve your tickets now!

We are so excited to welcome you back to our Mainstage. Please be patient as we adjust to a “new normal.” While many of our state’s protocols have been lifted, Four County Players will continue to follow the standards of safety which make our performers, volunteers, staff, and patrons feel safe. As such:

– We promote a mask-positive culture! While those who are fully vaccinated are not required to do so, we encourage you to wear a face covering over your mouth and nose regardless of your vaccination status. If you are unvaccinated or only partially vaccinated, a mask is required when inside the building.

– Seating is limited to about 100 patrons.

– When you select your seats (see website), our ticketing system will automatically space you apart from patrons not in your party. While we cannot guarantee six feet of distance between persons, you will not be sharing an armrest with anyone not in your party.

Tickets go on sale for All in the Timing at 10AM on Monday, July 19th!