As the summer of the Four County Players Return to the Ruins comes to a close, we’re handing over the reins of the blog to Kim Dukes, who offers a personal reflection on the revelries of 2019.

These our actors, As I foretold you, were all spirits, and Are melted into air, into thin air – The Tempest 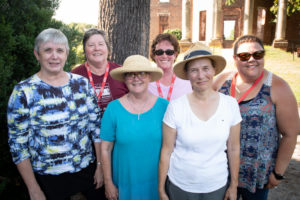 Linda Zuby (assistant director), Kim Dukes (producer), Lydia Horan (director), Wendy Novicoff (producer), Rachel Vere Nicoll (producer), and Kristen Heiderstadt (producer) brought wisdom and expertise from their past experience with Shakespeare at the Ruins to the return of the series in 2019.

Spending a summer at the Barboursville Ruins with my dear friends, putting on another Shakespeare play here after a thirteen-year hiatus, has left me awash in a sea of memories and visited by the ghosts of children and many dear friends. I met all of these wonderful people through Four County Players more than twenty years ago, and it has been such a gift to work together again after putting on so many shows together. One of the added joys this summer was getting to introduce so many of our cast and crew members to the magical setting and camaraderie of Shakespeare at the Ruins. Another was reuniting with old Shakespeare alums who returned to see this show and rekindle their love of the Ruins and their connections to one another. Each evening brought another round of old friends through the boxwood ‘gates,’ and my heart was overflowing.

I first worked on the Shakespeare at the Ruins play Much Ado About Nothing back in 1993 when I was very pregnant with our first daughter Emily. I gave birth during tech week, and the first time I left her alone with her dad was to come and see that show. It was the most beautiful setting I could imagine, and the magic poured out in every direction. I was hooked. There really is no other place quite like this one. Many of us worked on every Shakespeare at the Ruins show for many years following, wearing a path from parking lot to Ruins and back again (with a few too many jaunts up the back hill carrying folding chairs). So many memories were made out here sweating to Shakespeare. 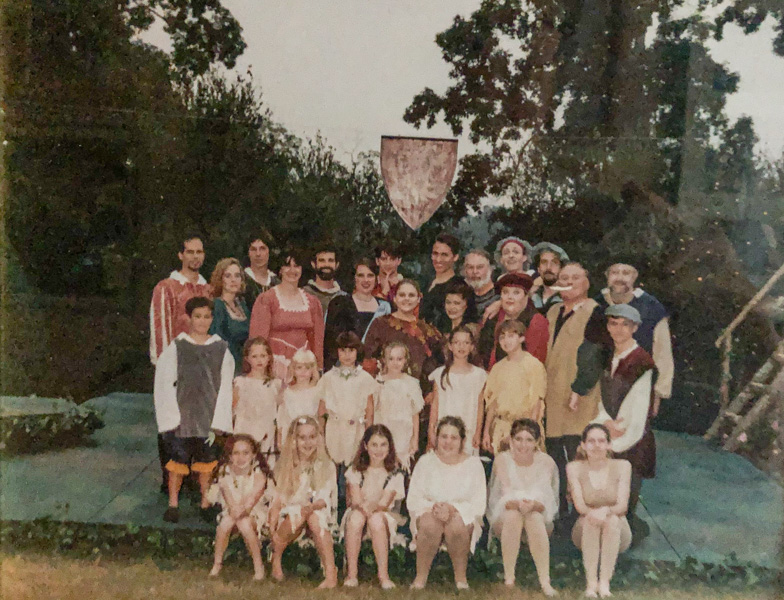 When I walk through the boxwood entry, my heart floods with memories and visuals. Instantly, I go back twenty years in time to remember young fairy girls scampering about the Ruins like ghosts, in and out of the boxwoods, where they spent hours playing and rehearsing. I see the 1998 fairy bower, complete with rope swing and working fountain, and picture those earthy little fairies skipping across the stage, giggling as they went, or playing Uno backstage with the older kids. I walk through the fairy entrance past their favorite places to play under boxwood branches and I see their younger versions as clearly as if I could reach out and take them by the hand. So many rehearsal nights we spent on blankets, surrounded by snacks and books. Countless workday Saturdays were spent in the summer heat, sharing a communal lunch with our 4CP family and friends as we labored in the sun together to build another set, put up lighting scaffolding or set up chairs. When the fireflies come out after dusk, I recall the childish delight at those nighttime sights and sounds that define a summer evening out here. I round the corner of the Ruins (the former backstage area) and see a twenty-something Kristen Franklin surrounded by all of the young actors as she entertained and supervised the lot of them during Comedy of Errors, memories they all cherish. I see the littlest of our fairies in a purple dragon costume and another as Mustardseed, sisters doing Midsummer again in 2005, their former fairy group a bit diminished in size.

Some of our girls homeschooled out there as well, leading Lewis and Clark expeditions through the woods and creeks, playing French bingo in the winemaker’s backyard, and running in and out of the cottage schoolroom that people now pay $300 a night to rent. We held epic Easter egg hunts in the boxwoods and the daffodil meadow. We ice skated on the pond across the road at night and picked and stomped grapes at birthday parties. We held an epic picnic with improv games inside the Ruins (with permission and a key!), because this place was like a home – such a major part of childhood. All but one of our girls got to come back to see this summer’s production, and one is actually helping out on the show. They all experience the same hyperbolic floods of emotion and memories out here. ‘This was my childhood,’ my youngest explained to her boyfriend as she introduced him to this special place and these dear friends opening weekend.

The time has flown by in unexplainable, speedy fashion and we have all put many a ‘girdle round about the earth’ since our last production at the Ruins. We are older and wiser than we were twenty-plus years ago, having weathered the countless ups and downs, celebrations and sorrows of the wonderful and the difficult that life has provided each of us individually. We are dearer friends to one another, especially after this very nostalgic summer of returning Shakespeare back to the Ruins and proving our mettle once again (with the help of many new friends). We share a volume of collective memories, and laugh and cry easily about them. And those little fairy girls? They grew into amazing young women who pursue their passions from varied locations and perspectives. They, like us, remain connected to this place and the grounding in love, magic, friendship and creativity it provided.

The ghosts of old friends no longer with us haunt this sacred green space as well; I felt their presence every night and in so many places: Tricia Belan in a shimmery costume, smiling from stage or sitting on the grass sewing someone’s costume during a work day; Pat Ohleger’s booming voice resonating from the onstage forest of Arden, commanding and inspiring his band of followers; Mary Brookman grounded center stage as the nurse, leaning behind Juliet with a wry look as she said ‘nay, I do bear a brain;’ Randall Herndon, arms outstretched as Wall with his sweet face all befuddlement, or running off the stage pursued by a celebrity guest bear in costume; Gene Frisch shuffling through the boxwood entry, in grey pants and a Shakespeare t-shirt, dragging an electrical cord or bringing someone the perfect tool (and detailed advice) for a job that needs doing. Roger was everywhere, standing lankily under a lighting tree, sitting in the back corner at his lighting perch, yelling out that he’s about to turn off the lights, then hanging around in the dark to chat under the stars after another great rehearsal or show. 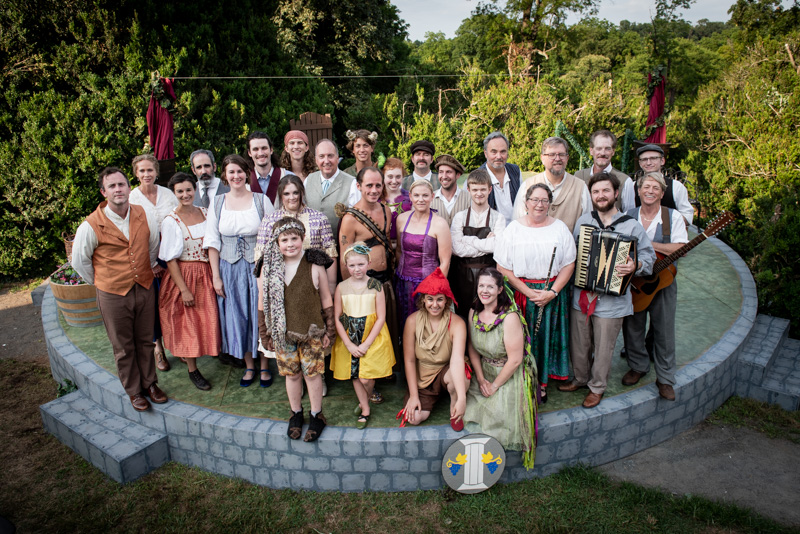 The cast of A Midsummer Night’s Dream, 2019, at the Barboursville Ruins

In the final scene of this summer’s production, Lydia placed some of the fairies in the boxwoods, illuminating just their faces as they peered out to watch the joyful dancing on stage. If I blinked and then looked again with my heart, sometimes those faces blurred and I could see Randall, Tricia, Roger, Mary, Pat, Gene or one of our little fairies instead – any one of my Shakespearean ghosts looking out onto a place they loved, beaming with pride and happiness that they were – and are still – a part of the magic that is Shakespeare at the Ruins.