Founded in 1973, the theater has delighted audiences with a full range of performance experiences. Located in the village of Barboursville, the theater is the cultural hub for the community, serving as both an artistic and educational center. Four County Players is well-known for its masterful musicals, hilarious comedies, and thought-provoking dramas. 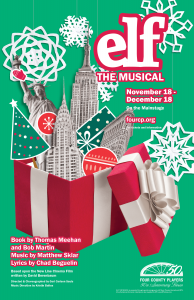 Book by Thomas Meehan and Bob Martin
Music by Matthew Sklar
Lyrics by Chad Beguelin
Based up on the New Line Cinema film written by David Berendaum
Directed & Choreographed by Geri Carlson Sauls
Music Direction by Kristin Baltes
November 18 – December 18
On the Mainstage
SOLD OUT! 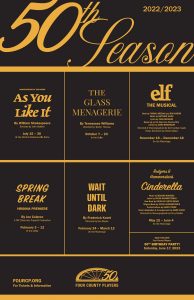 Four County Players is excited to announce your 50th Anniversary Season (2022 – 2023!)
As You Like It
The Glass Menagerie
Elf: The Musical
Spring Break
Wait Until Dark
Rodgers & Hammerstein’s Cinderella
Four County Players 50th Birthday Party!
Click here for details on dates, auditions, and what’s to come!

Follow along as we celebrate 50 years of theater and community at Four County Players!
Monthly updates will take you on a stroll down memory lane–season by season! We are pleased to announce our rescheduled performance dates for The Glass Menagerie: October 28 and 29 at 8PM, and October 30 at 2:30PM.
All tickets for this weekend’s performances have transferred to the new dates as follows:

If you have tickets for this weekend and are able to make your rescheduled date, there is nothing else you need to do!
If you are NOT able to make your rescheduled date, please reach out to Jennifer at 4countyplayers@fourcp.org or 540-832-5355 |
to either transfer your tickets to another date (pending availability) or get a voucher to a future performance in our 50th Season.

If you did NOT have tickets, you now have three more chances to see the show! Tickets for all dates are now on sale at FOURCP.ORG. Announcing Auditions for WAIT UNTIL DARK! CALLING ALL DIRECTORS!
Four County Players is now accepting submissions for Season 51, the 2023 – 2024 theatrical season. We are looking for passionate, creative, talented,
collaborative directors with proposals of the shows they would like to direct. Please complete the form at the link below to submit your show(s).
A separate form must be completed for each show. Submissions must be received by Sunday, October 16 to be considered.
You will be notified no later than January 2023 whether or not we are interested in moving forward with your proposal for the 2023 – 2024 season.
https://forms.gle/mHdJ4qVfySVHXEh39 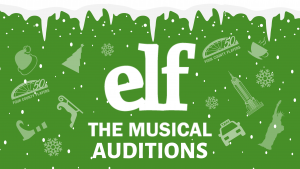 Congratulations to the cast, and thanks to everyone — over 50 talented actors! — who auditioned.
ELF: THE MUSICAL, with book by Thomas Meehan and Bob Martin, with music by Matthew Sklar and Lyrics by Chad Beguelin, is based on the New Line Cinema film written by David Berenbaum. The Four County Players production will be directed & choreographed by Geri Carlson Sauls, with music direction by Kristin Baltes. ELF opens on the Mainstage on November 18 and runs weekends through December 18. 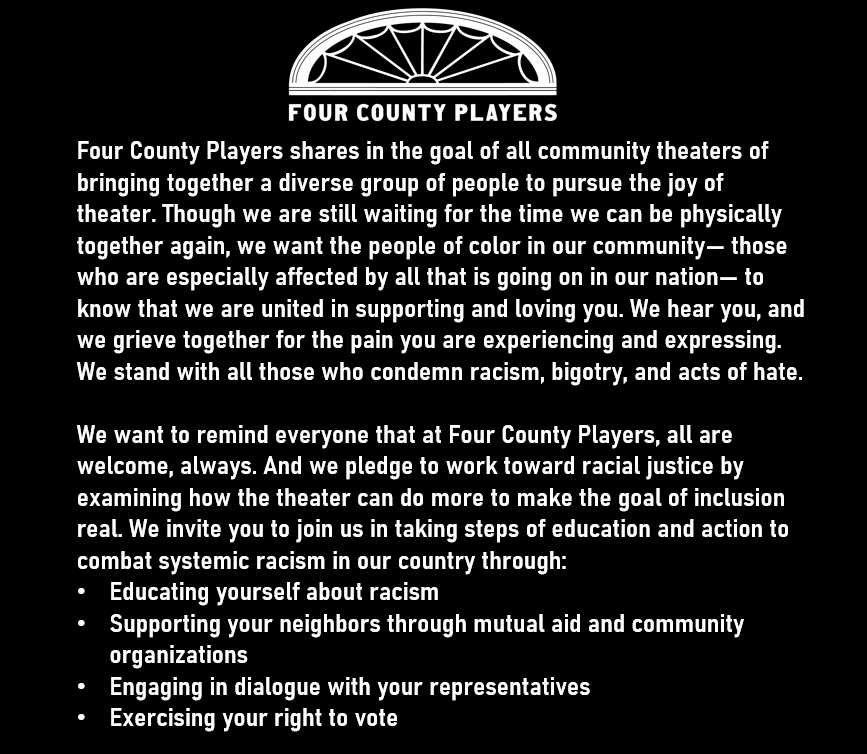