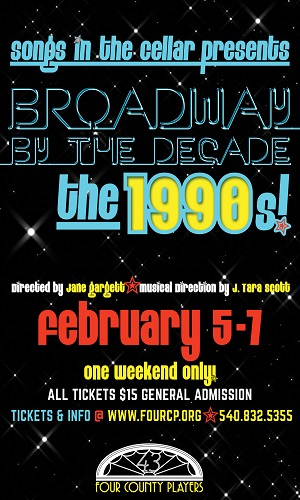 Songs in the Cellar: Broadway by the Decade: The 1990s!

Our Cellar cabaret series is officially a hit, selling out every single performance (prior to opening) in each of its past seasons! Now, join us for a third year — this time, tackling the abundance of wonderful music that filled Broadway in the 1990s! From shows like Falsettos to Footloose, from Rent to Ragtime, the decade was full of treasured songs that are destined to be musical theater classics — and several already are! Featuring some of the area’s most talented singers, Songs in the Cellar is not to be missed. Seating is limited–reserve your tickets early!