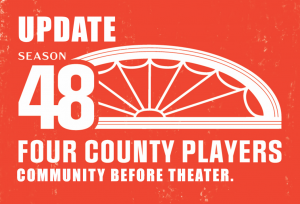 A few weeks ago, we sent out a survey to our community to gather thoughts and opinions on when, and under what circumstances, audiences would feel comfortable returning to Four County Players to enjoy live theater in the wake of COVID-19. We are so grateful that we received more than double our usual amount of survey responses!

The survey confirmed for us what we already knew: the landscape of theater isn’t going to be the same for quite awhile. Even with social distancing and stringent precautions in place, there is no way to continue “business as usual” with the kinds of large-scale shows that Four County Players has been producing. Additionally, since we are seeing data that show that some infected singers can become “super-spreaders” of COVID-19, it has become clear that big musicals are not advisable at this time.

Following the theater’s decision to postpone this summer’s planned production of URINETOWN, our programming committee, which is typically inactive from March – August, reconvened to discuss what adjustments can be made to our way of making and presenting theater moving forward — both short and long term.

After much discussion and deliberation, we are announcing that our originally planned Season 48 (2020 – 2021) is postponed.

What does this season postponement mean, exactly? It means that ELF: THE MUSICAL and RODGERS & HAMMERSTEIN’S CINDERELLA are being rescheduled for the 2021 – 2022 season, when we will hopefully be able to do these shows as they were intended: big, bright, and with lots of people! It means that we will not be producing any shows in the Cellar space through at least spring 2021. It means that our schedule will not look the same, and that it will continue to evolve as we all work our way together through the COVID-19 crisis.

Does this mean Four County Players is closed, or staying “dark”? Absolutely not! By postponing the originally planned 2020 – 2021 season, we are allowing ourselves the flexibility to make theater on an adjustable timeline — being able to respond to the ever-changing pandemic crisis in real time without having to worry about the domino effects even the slightest date change can have on a full season of planned shows. Our goal is to begin announcing one show at a time as they become feasible. You may even see some of the previously announced Season 48 smaller-cast shows make an appearance!

To “test the waters,” we are excited to announce that our next show, currently scheduled to run August 28 – September 6, will be a one-act consisting of three selections from David Ives’s ALL IN THE TIMING, a collection of comedic short plays, directed by Anna Grey Hogan. This production will be auditioned and rehearsed virtually, by and large, and will introduce our audiences to a new socially-distant seating model in addition to other precautions. Look for a detailed announcement about this coming in the next week!

As was said in an earlier announcement, the times are changing, and we are changing along with them. But our commitment to you remains unchanged: we will continue to make art, while always putting community before theater.

Finally, we want to make it clear that this community of which we speak includes our BIPOC (Black, Indigenous, & People of Color) family, who have long been under- and mis-represented in American Theatre at large, including at Four County Players. While it has always been our mission to be a welcoming, inclusive family to anyone who walks through our doors, we know there is much work to be done. If there is something good to come out of this interruption in our plans, it is that we have been given the gift of time to challenge and change inequitable structures, ideas, and behaviors that have been upheld by the systemic racism in our country. We are grateful for the opportunity to do this work both as we enter this new era, and for the rest of our organization’s future.

Central Virginia’s longest-running community theater isn’t going away; we’re going forward. Please join us on this journey. We need each other.

With love and hope,