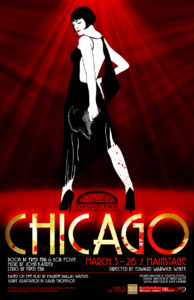 The classic, killer musical returns to Barboursville for the first time in over 30 years. Set in late 1920s Chicago and based on real-life murders and trials, Chicago follows Roxie Hart, a wannabe vaudevillian star who is arrested for the murder of her lover. In the Cook County Jail, Roxie meets her hero, the famed double-murderess and nightclub performer Velma Kelly. When both acquire the same lawyer, the greedy and lustful superstar, Billy Flynn, tensions come to a head as they vie for the spotlight. Murder, mayhem, greed, sex, and all that jazz come to roaring life like you’ve never seen them before in this musical vaudeville.

CHICAGO is presented by special arrangement with Samuel French, Inc.