If you’d have been there….

Join Four County Players president Debbie Owen as she walks us through the Build a Backstage dedication celebration we wish we could have had. 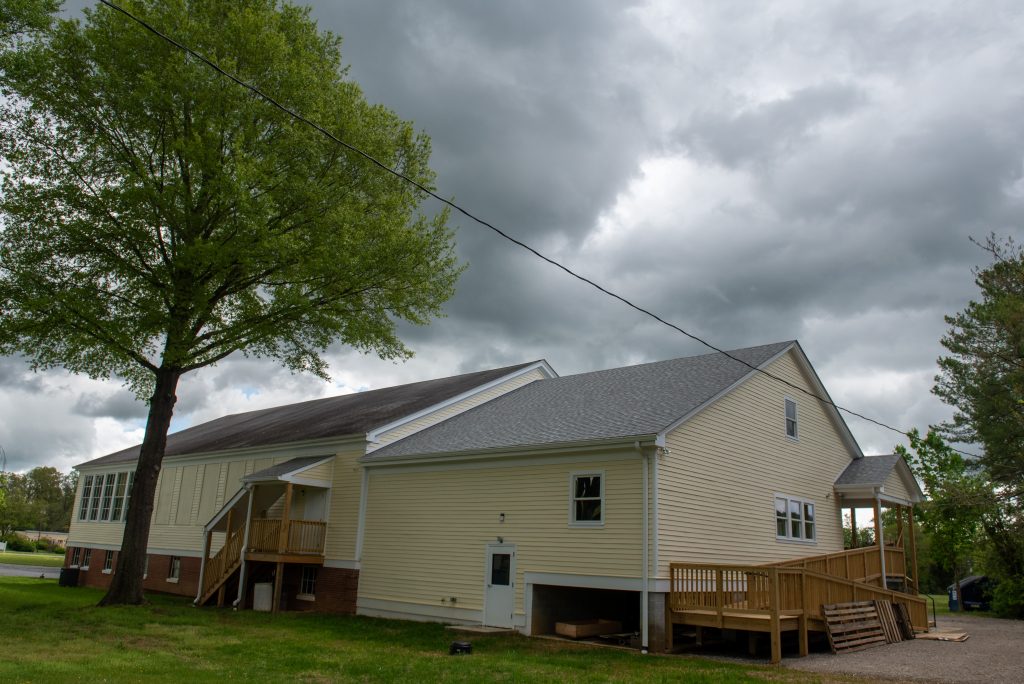 Only a year ago, on a perfect spring afternoon, seventy-five members of the Four County Players community gathered for a groundbreaking ceremony to launch the long-awaited Build a Backstage project. Then, while our attention turned to a glorious summer of Shakespeare at the Ruins, our little theater underwent an amazing transformation!

Though the backstage has already been completed and pressed into service for two Mainstage productions, the board wanted to hold an official dedication on the one-year anniversary of the groundbreaking. The suspension of that event was just one of the many heartbreaking COVID-19 cancellations we’ve all experienced. Still, I want to mark the anniversary here on the blog and offer a little taste of what we would have shared if we had been able to hold a dedication at the theater and to reflect on the vision, work, and support of so many who made the project a reality.

If we had been able to be together, we would have surely enjoyed a slideshow documenting the progress of the construction. The construction-friendly weather last summer allowed our builder Kevin Gallihugh and his crew to make steady progress on the addition. From foundation to walls to roof, we were thrilled to see the progress each week as architect Kerry Moran’s designs took shape. An ad-hoc backstage utilization committee met in August to prepare to inhabit the new space, and the shop was in full use for construction of the White Christmas set.

We would have made sure to recognize our donors. Randy Clark, chair of the fundraising committee, cultivated individual, corporate, and foundation support for our project. In particular, we are thankful for the support of the Perry Foundation for two timely matching grants that showed confidence in our ability to complete the capital campaign. And a handful came through with needed gifts as we neared the end of construction. The Circle of Finish Line Supporters includes Anthony and Geraldine Ficarra, Elaine Fogliani, Amy Goffman, Barbara Y. Hamran, Charlie and Debbie Owen, Julie Sanders, Carl and Sandra Schwaner, Jeff and Karen Ward, and Stuart White.

And we would have especially set aside time to thank Carl Schwaner, the head of the Build a Backstage committee. While many people were involved in the project over the years (e.g., the BABs committee, the 4CP board as a whole, professional consultants, etc.), Carl was the one person who kept the project moving forward … even through the months when we were slowed by multiple roadblocks. As a way of thanking Carl for his invaluable contribution, the Four County Players Board of Directors has agreed to grant him a Lifetime Membership. Lifetime Memberships have been bestowed very rarely to recognize a significant lasting contribution to the theater. Carl is most certainly deserving of this honor!

The uncertainty of the times means we don’t know when our stage will again be lit and our backstage humming with the activity of building a set and staging a show. One thing that’s certain, though, is that when we do reopen and our community is reunited, the support for and love of this theater will be present on-stage, in the audience, and in our beautiful backstage workspace.

We look forward to the day when we can again gather together in person and have a big party to celebrate the backstage, our return to making art, and especially our theater community.