Making the most out of minor roles 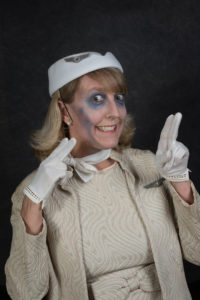 Lisa Medders has appeared on  the Four County stage many times over the years in several revues, as well as Bye, Bye Birdie, A Charlie Brown Christmas, and The Addams Family. Whether her part is small or large, everyone agrees she has a big talent and a bigger heart. Thanks, Lisa, for sharing your thoughts on StageWrite!

I ’m playing “Mrs. Armstrong” in the upcoming production of The Best Christmas Pageant Ever and I’m on the stage for a total of five minutes, maybe six if I speak slowly. I am literally rolled on in a hospital bed, rolled off, and then rolled on and off one more time. I don’t show up again until curtain call about 40 minutes later. And I am having so. much. fun! 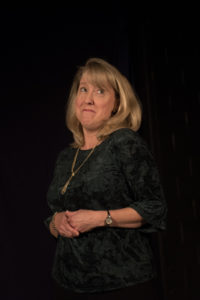 I keep messing up this one line, saying with loud old lady fervor, “There are no small ACTORS, only small PARTS!” I’ve probably said it wrong at least three times since then. But guess what? This IS a small part. This is not the first time and surely won’t be the last time that I’ve tried for a major role and been cast in a minor one, and that is okay. But did you know that one of the best things about having a minor role in a show is that you have time to play a major role in the cast? You have time to get to know people, you can help them with costumes or props, you can keep people’s spirits up when they’re having an off day, and you can congratulate them when they nail it. You’re like the cheerleader who gets to share in the team’s success without having to actually remember the plays.

Don’t get me wrong. I would looooooooooooove to get a major role. And each time I audition, I have that hope that maybe, just maybe, it will be my time. And that is one of the many wonders of community theater—the possibility. Still, more often than not, we are faced with disappointment. Especially in community theater, where there is an abundance of talent and not enough parts, it can be easy to get discouraged. I certainly have been at different times. But I have never ever not once regretted accepting a minor role. In fact, a few years ago I was offered a minor role and since regretted having to turn it down!

We all participate in community theater for a variety of reasons. But I think for many of us, the most important part is being in a community. Getting to direct or act or sing—those are just bonuses. I’m 45 ½, and I still have much to learn, but one thing I know to be true: You don’t have to be the star to shine. 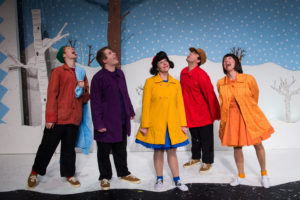