IT’S ALIVE! An update on Build a Backstage Four County Players president, Debbie Owen, is on StageWrite today, sharing an update on the Build a Backstage campaign, the theater’s initiative to build an addition at the rear of the building, providing workspace, storage space, and a weatherproof environment for actors and builders. Thanks, Debbie, for keeping us all in the know!

When Young Frankenstein opened a few weeks ago, audiences were blown away by the technically challenging, visually spectacular, funny and engaging musical. What audiences didn’t see were some of the challenges faced backstage during the show. Friday night’s thunderstorm led to slippery steps on the back deck and water seeping into the downstairs hallway where the actors change. Sunday, angry wasps and crushing humidity made for challenging costume changes in the makeshift dressing area on the back deck. In the meantime, the stage crew had to play “Tetris” backstage to fit all the great set pieces into the right spots between scenes.  If ever we had a reason to build our backstage, the conditions for this show proved once again why we are pushing forward with this project.

I know it’s been a long time since we gave you an update on the Build a Backstage project. Over the last year, this project faced some unexpected turns and delays, but it is nonetheless moving forward with renewed purpose and energy.

Last year was capped off by reaching the fundraising target of $90,000 to secure the Perry Foundation matching grant of $50,000! Thanks to the dedicated work of our fundraising team (board members Randy Clark and Barbara Wimble, and theater friends Sarah Bossong and Mary Jo Browning), many of you responded to our appeals and gave generously toward this goal.

From the planning side, the past year has been one of trying to get a realistic understanding of just how big this project would be and the amount of resources it would take. When our original design proved to be beyond the scale the board felt comfortable taking on, we went back to architect Kerry Moran to revise the design. With just a few tweaks to the plans, we believe that we now have a plan that can be completed for approximately $250,000. 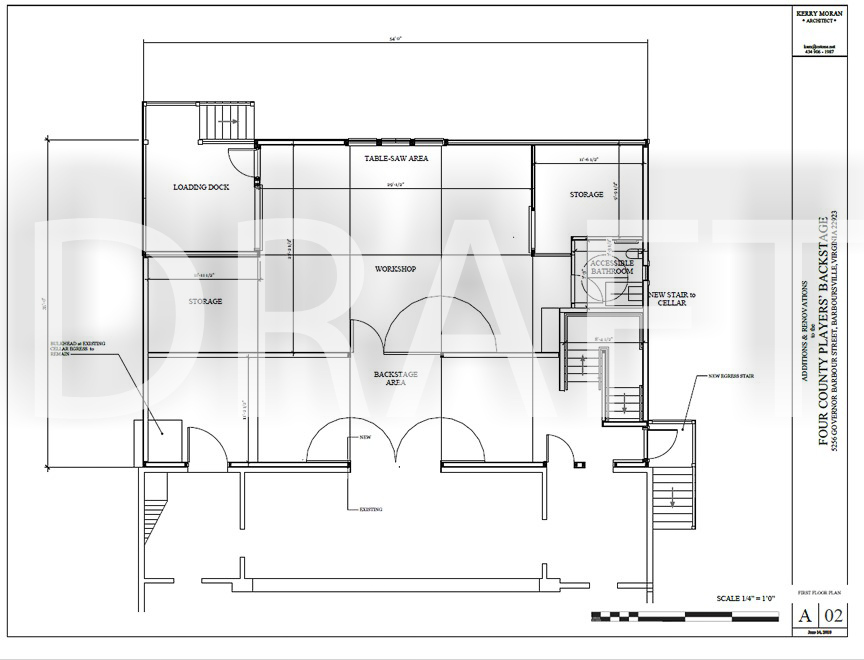 The next steps for the planning team include meetings with Orange County officials to confirm permit issues and consultation with builders and engineers to make sure that the revised design will be structurally manageable with the existing building, all the while staying under our $250,000 target. We hope to have a fixed design and building schedule by early October.

What does this mean for fundraising? Thanks to ongoing efforts over the months, we have now raised a total of $183,000! (Just typing that, I get a lump thinking about what our precious theater community has already accomplished!) We recently received a second donation from the Bama Works Fund of the Dave Matthews Band, and greatly appreciate their continued support. In addition, a loyal patron has given an additional $20,000 gift to help us challenge others to keep this campaign moving forward.

With all of these efforts, we are less than $75,000 from our goal. Will you be part of getting us to this goal? Look for announcements of events that will bring us together to support the Build a Backstage campaign. If you’ve already given to this campaign, share the story of Four County Players with others who might want to give. Together, we can create a fully realized, working, safe backstage for our dear theater.