Season 45: State of the theater report

As Season 45 closed, theater members gathered at an Annual Meeting to hear about the year, share thoughts and ideas, and vote on various matters. This year, we bid farewell to Sid Wood, who concluded his service on the board, and welcomed Matt Gargett to complete Sid’s term.  Debbie Owen, Elaine Fogliani, Tres Wells, and Jim McConnell were reelected for a three-year term.  The membership also voted on amendments to our bylaws, including minor changes to the position of youth representative on our board of directors and the establishment of a mission statement for the theater (More on that soon!)

A highlight of the evening was a state of the theater report from Debbie Owen, president of the Four County Players board of directors..  Read and enjoy her remarks!

Once again, it is my privilege to share with you what has been going on in the life of Four County Players for the past year. Our Programming Committee put together a very challenging 45th season, and working together, we again proved to be the Little Theater That Could.

The season started last summer with The Addams Family on the Mainstage, followed by a special musical birthday party in September with The Best of Barboursville. In October, a stellar cast filled the Cellar with the haunting themes of The Crucible. We filled the house many times over with the ever-popular musical version of A Christmas Story, and then the ladies took over the Cellar for the musical revue A View from Some Broads. The comedy Noises Off! filled the Mainstage with sardines in March, and we ended the season with the puppet musical Avenue Q, which reminded us that most trials in life are “only for now.” 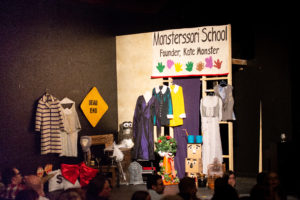 Throughout this season, we sold 5,654 tickets, reached 240 members, had 70 summer campers, and had over 500 volunteers. Along with the usual army of set builders, ushers, bistro workers, costumers, lighting designers, etc., that it takes to put on a show, we had some unusual volunteer categories this year: the special team that turned the Noises Off! set every night, puppet dressers for Avenue Q, and even an anonymous graffiti artist who came in the middle of the night to add authenticity to the Avenue Q streetscape!

One of the biggest offstage projects undertaken this year was the renovation of our Bistro. The new Bistro, with a design by Kerry Moran, contracting work by Biery Davis, and project management by Row Halpin, provides an easier layout for the bistro volunteers, improved customer flow, and a nicer aesthetic look for the room.

The project that did not have much forward momentum this year was the Build a Backstage project (BABS). Last year, we had hoped to break ground in Spring 2018. After facing setbacks in finding a construction firm or partner that we could work with on the building phase, we realized that we needed to rethink our design and give ourselves more time to map out the project. So, we pushed back our projected start date by one year and feel that we are now back on track with a more realistic project and fundraising goals. Stay tuned for more details about BABS in a separate blog post! 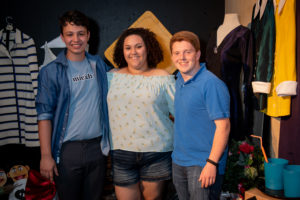 This summer, we are working as quickly as possible to get the elevator repaired so that we can restore disability access to the building. It was a big blow when the elevator suffered a fatal break right before Avenue Q opened, and we have already received quotes on a full replacement.

We were saddened a few weeks ago by the passing of Pat LaLand, a former board member and long-time supporter of this theater. Pat served on the board for a few years up to 2007, and appeared on this stage many times in the early 00s. After leaving the board, she continued to be an enthusiastic audience member and supporter of Four County Players. We will miss her.

The board is saying goodbye this June to Sid Wood, although he promises to stay around and keep doing what he does best on set builds, building maintenance, and the BABS committee. We will miss you at the meetings, Sid, but we know how to find you!

Finally, I am constantly amazed by and thankful for the amazing board that I am privileged to work with. This group works so hard, with a production schedule that never allows a break, and they step up time after time to do what is needed. In particular, Meg Hoover has already taken great initiative in the position of Volunteer Coordinator, improving volunteer engagement and recognition. Production Manager Gary Warwick White deserves a standing ovation for the devotion he gives to every show, upping our production values and keeping the quality consistent throughout the season. 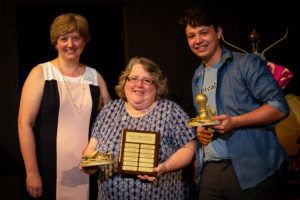 I truly think of this theater group as a family, and want to spend time in the coming year reflecting on what that means in practical terms. From the way we welcome newcomers, to hospitality for our patrons, to working relationships on shows and committees, I want to foster an environment that is inclusive, healing, and unified in the common purpose of creating great theater. I hope you will join me in that quest and be part of the family!