Building a better Bistro and a better future 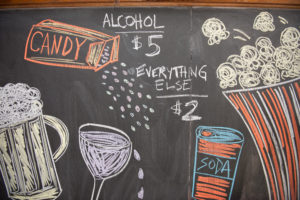 All the popcorn, candy, and beverages our audiences enjoy during every show have helped Four County Players build a better Bistro.  We’ve been saving our pennies for a long time! That means that without affecting our ability to award the Founders’ Scholarship, the Bistro committee significantly upgraded the theater-going experience while at the same time making volunteer service behind the counter more efficient. 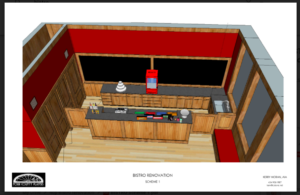 Kerry’s design launched the project into a new direction, one that’s proven popular and efficient.

The project began with an original concept by architect and supporter Kerry Moran who proposed moving the Bistro counter to the opposite wall and drafted a design.  Also critical to the success of the renovation was the invaluable leadership of our theater operations director, Rowena Halpin, and the craftsmanship of Terry McDufee at Blue Run Cabinet Shop and Biery Davis of Burnley Restorations. Four County is grateful to these talented people and to the members of the Bistro committee: Marianne Shepard, Tres Wells, Linda Hogan, and Brittany Eversberg.

The new Bistro debuted during our recent run of Noises Off.  That opening was particularly appropriate since the three-act farce offered audiences two intermissions to indulge in fresh popcorn, soda, brownies, candy, beer, and wine. At least one patron, though, reported laughing so hard at the onstage antics that she spilled her whole box of popcorn. 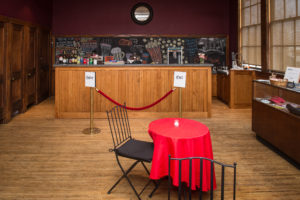 There’s plenty of room to sit and enjoy a snack before the show. And our merchandise and membership counter helps you support Central Virginia’s longest running community theater.

While the Bistro committee has been focused on getting the new Bistro up and running, we haven’t forgotten about one volunteer who bears much of the responsibility for making it what it is today.  Kristen Franklin Heiderstadt can be credited with originating the current form of the snack bar beginning in 2001. “I saw the potential for the Bistro to make decent money,” she says. She did a full overhaul of the space and added the popcorn machine after renting one when they did a Coney Island-themed Bistro during the run of Brighton Beach Memoirs.  “The popcorn was such a hit that we decided to purchase a popper for long-term use.” She also added Barboursville wines. Coffee came from the former Barboursville Bean coffee shop, which gave Four County the commercial coffee maker still in use.

And Four County has never lost sight of Ralph and Marcelia Hall’s original goal for the refreshment sales:  supporting young people in their quest for further education. They started selling refreshments in 1981, establishing the Founders’ Scholarship.  Money earned in the Bistro helps fund the college educations of young people involved at Four County Players. Learn more about the Founders’ Scholarship and apply.   http://fourcp.org/scholarships/ Materials are due by April 15.