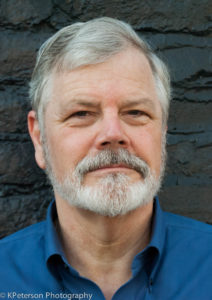 Rehearsal has begun for the Four County Players production of The Crucible.  ‘Rick Gray, who directed Macbeth at 4CP in 2015, is now taking on this classic work in the American theatrical canon. Learn more about ‘Rick and his approach to staging the show in the Cellar.  The Crucible opens October 13, 2017.

I’m happy to say that the only day job I have is to write my novel.  Thus far, I seem to finding other things to do with my time – morning coffee with a collection of fellow codgers in Staunton; bucket-list travel; directing the occasional play.  What Steven Pressfield, in The War of Art, calls “The Resistance”.  But after The Crucible, no more excuses.

In my earlier life, I did a variety of things.  Between the ages of 25 and 42, I practiced law; held state office (Secretary of the Commonwealth); taught high school; and spent a year as an assistant principal.  Then I began acting professionally – doing a lot of regional theatre and playing interesting roles such as Macbeth, Atticus Finch, and Henry Higgins (three times).  I still consider myself a professional actor, but the bulk of that work came in the first decade.  More recently, I spent eleven years writing a weekly column for a paper in my hometown of Chester, Virginia.

Over the years, I’ve also been an occasional political activist, working in a number of campaigns, for both parties.  One favorite political memory was serving as occasional escort to the wife of John Warner when he first ran for the US Senate.   Her name was Elizabeth Taylor.

My experience with Four County Players goes back to 1990, when Sara Bossong cast me in the first of three Shakespeare at the Ruins productions.  In the early ’90s, I acted in a number of shows, including

​a​ memorable production of Into the Woods.  In 1999 and 2001, I did two stints as Ebenezer Scrooge.  Finally, two years ago, Four County allowed me to try directing – with Macbeth.​

Why did you want to direct The Crucible?

In all candor, I wanted to direct King Lear, on the mainstage, but the programming committee had reservations – probably about whether enough theatre-lovers would make reservations.  So I submitted a list of five alternatives, and the committee chose The Crucible – perhaps because of my previous success in attracting strong actors to do an October show, in the Cellar, involving witches. 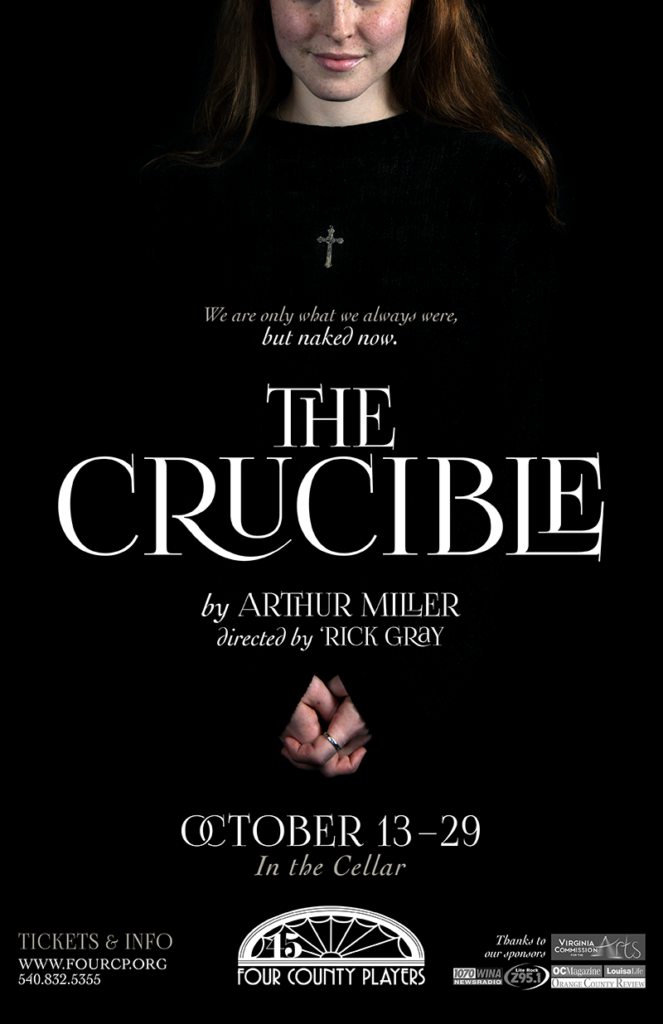 This is your second time directing a show in Four County’s Cellar.  What is especially compelling about the space?  Why does it suit The Crucible?

Let’s be clear.  This is my second time directing anything – if you don’t count church Christmas pageants and the occasional staged reading.

What’s compelling about the Cellar space is its intimacy and flexibility.  In terms of The Crucible, we’ll be able to use this space to create a sense of claustrophobia which I think suits the close and, potentially, suffocating nature of Massachusetts society in the 1690s.

What most excites you about this production?

Two things.  First, the remarkable people I’ll be working with.  We have a great team, headed up by Wendy Novicoff, who was indispensable as my producer for Macbeth.  Wendy has been a friend since she allowed me to play her husband in that long-ago Into the Woods.  I feel very happy with the cast, too, though I met most of them for the first time at auditions.

Second, the opportunity to improve.  I hope I learned something from directing Macbeth.  But even more, I’ve learned an enormous amount at second-hand from my friend, April, who teaches Theatre at William & Mary.  Over the past three years, she’s directed three brilliant shows – ranging from Chekhov’s The Seagull to Steel Magnolias.  Discussing her work has taught me an enormous amount, and I hope to put it into practice. 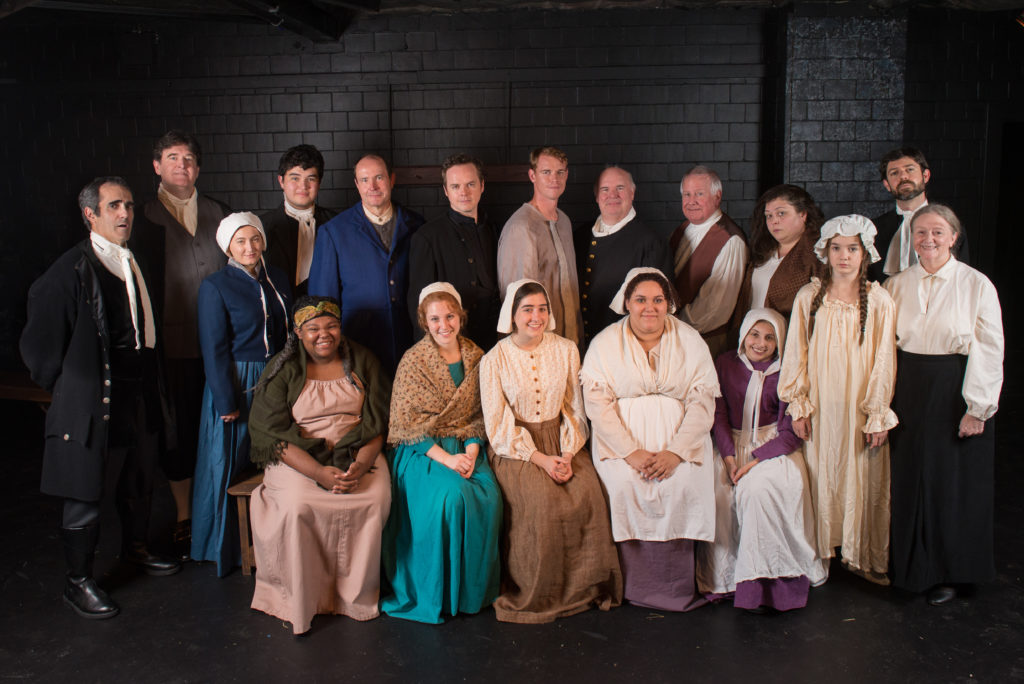 How do you prepare to direct a show?  Can you tell us a little about your approach to directing?

I believe my job is to do justice to the story – or really, stories – that the playwright has chosen to tell.  I work with the actors to discover what their individual characters are fighting for; what relationships shape their behaviors; what obstacles they encounter; and how they are changed by the conflicts in which they are involved.

Because I have a background as a history teacher, I feel able to give the actors – and through them, the audience – a sense of the world in which the story takes place.  For The Crucible, I’ll have a partner in this – our dramaturg, the Rev. Isaac Collins, who has a scholarly interest in the period.

What is your take on how this piece might be especially appropriate for our time in history?

My take is that any great play has something to teach us about our own times.  Human nature, if it changes at all, changes very slowly.  I’m a long-time Shakespeare buff, and in the past few years, I’ve become more and more fascinated by the Greeks.

A year ago, my friend and I flew to New Orleans to see a staged reading of Sophocles’ Ajax by Theatre of War, a company which puts on Greek tragedies for audiences of war veterans.  Theatre of War has shown that this 2500-year-old play can be remarkably therapeutic for veterans struggling with their experiences in combat, and of returning to a country which often doesn’t seem to understand them, or even care.

That said, I’m sure many of our actors, and many in our audience, will find parallels between this play and our own time.  But I’ll leave that to them.  We’re not going to emulate Shakespeare in the Park by dressing anyone up in a baggy business suit with an over-long tie and orange wig.

As with Macbeth in 2015, we’ve decided to turn our two Thursday night brush-up rehearsals into free performances for K-12 students.  I hope to see full houses of young people at both shows.