Playing by heart: For Wallers, theater is a family affair 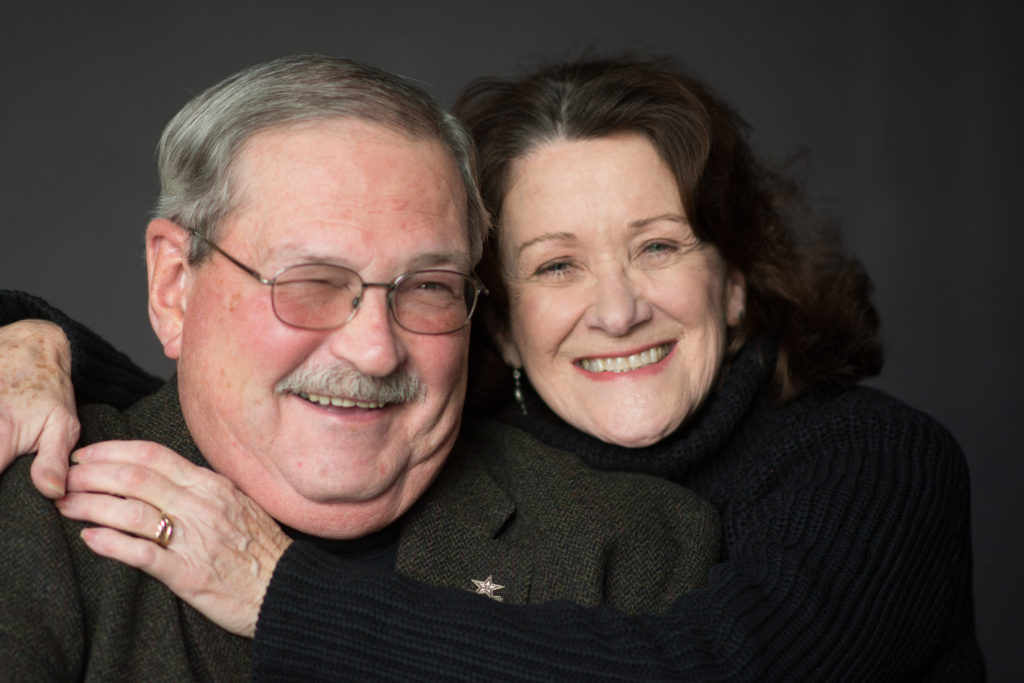 They say some of the greatest romances happen on stage, and for Kenneth Waller and Linda Poser, they were pretty close. From Broadway to Barboursville, we’re catching up with the stars our upcoming production of A.R. Gurney’s Love Letters in a “he said/she said” interview. What began as a “showmance” blossomed into a thirty-seven-year marriage of real-life laughter, love letters, and countless curtain calls.

How did you meet?
Linda: We had both gotten a job in a production of Guys and Dolls going up in Boston.  First day of rehearsal, we met in the lobby of the hotel they had put the cast in. I had read my horoscope for that month.  It predicted that I would meet the man I would marry!  We introduced ourselves and I thought, “Is this the man I’m going to marry?  He is kind of cute. . .”
Ken: We were both doing a production of Guys and Dolls at a dinner theatre just outside of Boston. The cast was assembling in the lobby of the hotel where most of us were staying, waiting to be taken to the theatre. I saw Linda sitting there and I remember speaking first–asking if she was in the cast.

Was it love at first sight?
Linda: It wasn’t love at first sight for either of us.  We were friendly, but he dated my roommate during and after that Guys and Dolls gig.  We met again about a year or two later and started dating then.
Ken: No. She was the first girl in the cast I had met, so I think it is fair to say I wanted to meet all of the others before making any judgments.

What do you love and admire the most about your spouse?
Linda: His good looks, his sense of humor (he makes me laugh!), his good manners.  He’s the nicest person I’ve ever known.  He’s a good person.
Ken: There are not enough words or enough space to even begin to list all the things I love about Linda. And more reasons show up every day.

Did you ever send love letters to one another?
Linda: Yes! We started dating, and Ken went on the road with a show.  We wrote back and forth.  Once we married, we would, at times, be on the road in separate shows and wrote letters often.  I still have some of the best of these!
Ken: Yes. Early in our courtship, we were separated from each other much of the time. Either I was on tour or she was. I was never much of a letter writer, but it’s lonely out on the road. 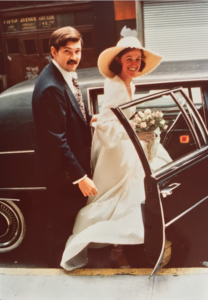 Kenneth Waller and Linda Poser on their wedding day

Any advice for other married couples, or couples starting out?
Linda: Of course marry someone you are attracted to and whom you LOVE!  Make sure it’s also someone who is your best friend!!
Ken: Let the woman have her way. She will be right most of the time, and it will save a lot of time in the long run.

What do you love most about performing together?
Linda: We can discuss the script, rehearse together at home, and we’re “working” the same hours.  Also we’re comfortable with one another!
Ken: I admire my wife’s talent. It is a challenge for me to keep up with her. We have a lot of time to feed off of one another/work on our performances. It’s nice to have the same hours. 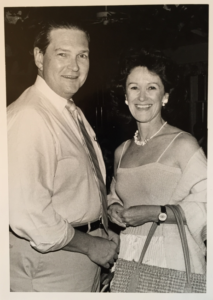 What excited you most about performing Love Letters?
Linda: Because the show is a staged reading, I didn’t have to memorize lines which gets harder for me the older I get!
Ken: I like the piece. A.R. Gurney is a favorite playwright of mine. I have been involved with two of his other plays, Sylvia and The Fourth Wall. I think it was very kind of Four County Players to ask us to be a part of this. 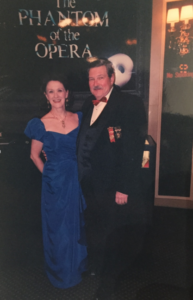 Linda Poser and Kenneth Waller celebrating The Phantom of the Opera surpassing Cats as the longest-running Broadway show, June 10, 2006

About Ken and Linda: 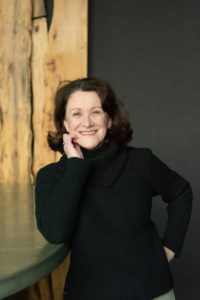 LINDA POSER was born many, many years ago in Los Angeles. She loved going to the movies at an early age, and fell in love with tenor Mario Lanza while seeing him on the big screen as Enrico Caruso. By the time she was in high school, she knew, without a doubt, that she wanted to be on the stage. She majored in Theatre Arts at San Francisco State University and received her BA from there, as well as a Master of Arts Degree. In San Francisco, she appeared as The Girl in The Fantasticks, and as Lucy in You’re a Good Man, Charlie Brown. After earning her Actors Equity Card, she moved to New York City in hopes of becoming a big Broadway star.
The stardom part didn’t quite happen, but, even better, she became a working, professional actor. Her first gig out of New York was a production of Guys and Dolls in the Boston area, and in the cast was Kenneth Waller, who dated her roommate during the show. The following summer, she was cast in a production of Carousel, and so was Kenneth Waller. Linda and Ken began dating whenever they were New York at the same time, which wasn’t very often, so they corresponded with letters (and eventually love letters!!).
Linda made her Broadway debut in On the Twentieth Century starring Madeline Kahn and Imogene Coca. This was followed by The Grand Tour, starring Joel Grey, three other Broadway shows that didn’t do so well, and finally, The Phantom of the Opera, playing a number of roles, including Madame Giry. Linda has appeared locally in such roles as Desiree in A Little Night Music, Maria Merelli in Lend Me a Tenor, Kate in All My Sons, and Mme. Dindon in three productions of La Cage Aux Folles.
In Richmond, she has appeared as Mrs. Norman in Children of a Lesser God and as Mrs. Meers in Thoroughly Modern Millie, for which she received a Richmond Critics Circle nomination for Best Supporting Actress. 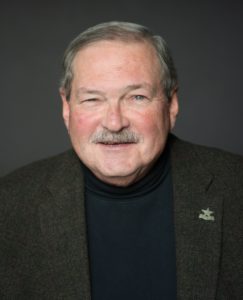 KENNETH H. WALLER
After graduating from a small college in north Georgia with a BFA in Drama and not knowing what to do next, I decided to go to New York. That was in the fall of 1969 — forty-nine years ago. (Whew!) I was very lucky to be cast in the National Tour of Zorba, which opened in Philadelphia on January 26, 1970. The show starred three giants of the Broadway stage: John Raitt, Barbra Baxley, and Chita Rivera. I later went on to do many shows with John Raitt.
In the theatre, like most things, success depends on being in the right place at the right time. I was lucky to be in the right place most of the time. I went on to tour with the companies of Carousel, Kiss Me Kate, 1776, Showboat, South Pacific, Shenandoah, and Evita. I also did summer stock and dinner theatre productions of Irene, Guy and Dolls, The Fantasticks, and La Cage Aux Folles. During that time, I met the love of my life, Linda Poser. She is also one of the best performers I ever had the pleasure to work with. We later moved to the suburbs of New Jersey and produced our greatest success, our daughter, Amy.
My first Broadway show came in 1979 with Sarava (not a great success, but very exciting for me). Later came Onward Victoria — an even lesser success, but my wife was also in the cast, so again, very exciting. I also did a show with Antony Newley — Chaplin — in L.A. It was supposed to go to Broadway, but didn’t make it. “Well, that’s show business.”
In 1984, I had the great opportunity to go to London and co-star in a show called Blockheads. I played Oliver Hardy, and was a great success. The show was not. Again, “That’s show business.”
My next Broadway show was a giant success: Me and My Girl, starring Robert Lindsay (he won the Tony for best actor in a musical). I don’t think there are many things in life better than being in a hit Broadway show. My next Broadway endeavor was the mega-hit Phantom of the Opera. I stayed with Phantom for sixteen years (that’s 6,262 performances!). After that, Linda and I moved to Virginia to relax (Ha, Ha!) and play golf. It was my good fortune to find Four County Players and be introduced to the theatre community here in Central Virginia. I directed and appeared in several shows here at 4CP,  including Sylvia and The Fourth Wall, both written by A.R. Gurney. It is a great group to work with and I urge everyone to join.

Mr. Waller and Ms. Poser are Members of Actors’ Equity Association, the Union of Professional Actors and Stage Managers in the United States, and will be appearing under a Special Appearance Contract.

Love Letters opens February 3, 2017 and runs for two weekends only in the Cellar. Tickets can be purchased by calling the Box Office (540.832.5355) or by visiting us on the web (www.fourcp.org) Seating is limited. Parental discretion advised.