From ghoulies and ghosties…/And things that go bump in the night, /Good Lord, deliver us!

Welcome to guest blogger Kim Dukes!  Here Kim brings us the true spirit of Halloween by remembering those at Four County Players who haven’t let their passing keep them far from the theater.  Thanks, Kim, for this fascinating glimpse into our beloved building and the gifts of those who made it what it is.

Who else should we be remembering?  Let us know!

Anyone who works, lives or spends an inordinate amount of time in an old building knows to expect odd noises, fleeting movements that catch the eye, or unexplainable feelings of someone or something watching or passing by. Those moments, which almost always happen when no one else is nearby, make your heart pound a little faster, cause the hair on the back of your neck to stand up, or make you move quickly as you pass through a creepy basement space or a dark backstage area. When the moment has passed you laugh at yourself for regressing to that five-year-old ‘monster under the bed’ state, to that twitchy young teen who just watched a horror movie and expects an axe murderer to leap out from behind every shower curtain. 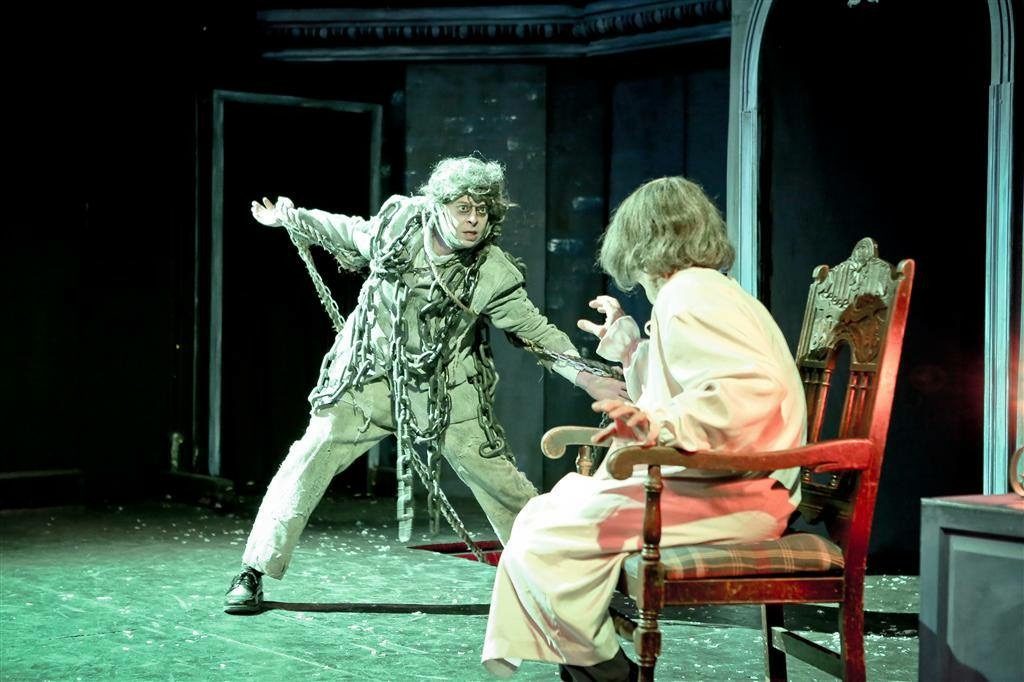 Though stage depictions of ghosts, like the ghost of Marley in A Christmas Carol, are expected, 4cp also has its share of stories about offstage paranormal occurrences. Photo by Greg Harris.

I spent more than a dozen years working on Four County shows in every capacity from usher to producer to stage manager to cast member to board member to paid theatre manager, and I came to know (and accept) that even when I was the only person in that beautiful old playhouse, I was never alone. In talking to other longtime volunteers, it soon became clear that I was not the only person who had ever experienced that feeling.

The most long-term and well-known guest spirit at Four County is that of a former teacher in the old Barboursville schoolhouse. She sits in the same seat night after night, in the back row, near where one of the old in-theatre bathrooms used to be situated. So many actors have looked out over the auditorium from the stage and caught a glimpse of her sitting back there. Or someone working on the stage might suddenly turn around because they felt someone there when they thought they were alone, only to see her briefly. Those who have been in more than a few shows know to expect her to make an appearance.

The theatre sits back from the road a bit and the parking lot was not always paved. (It still surprises an old timer like me every time I pull in to find paved spots awaiting me). When I worked as theatre manager, and was alone for hours at a time, I found myself with ghostly visitors more than once. From inside the office, I would hear the front door open, then hear footsteps in the hall. I would yell out a greeting as I stepped out of the office and into the hallway, only to find the place deserted. A quick look into the theatre and bistro, then a dash out onto the porch would reveal no car, no trail of dust in the unpaved lot as someone pulled out, nothing but the realization that, despite all rational explanations, I was not alone. 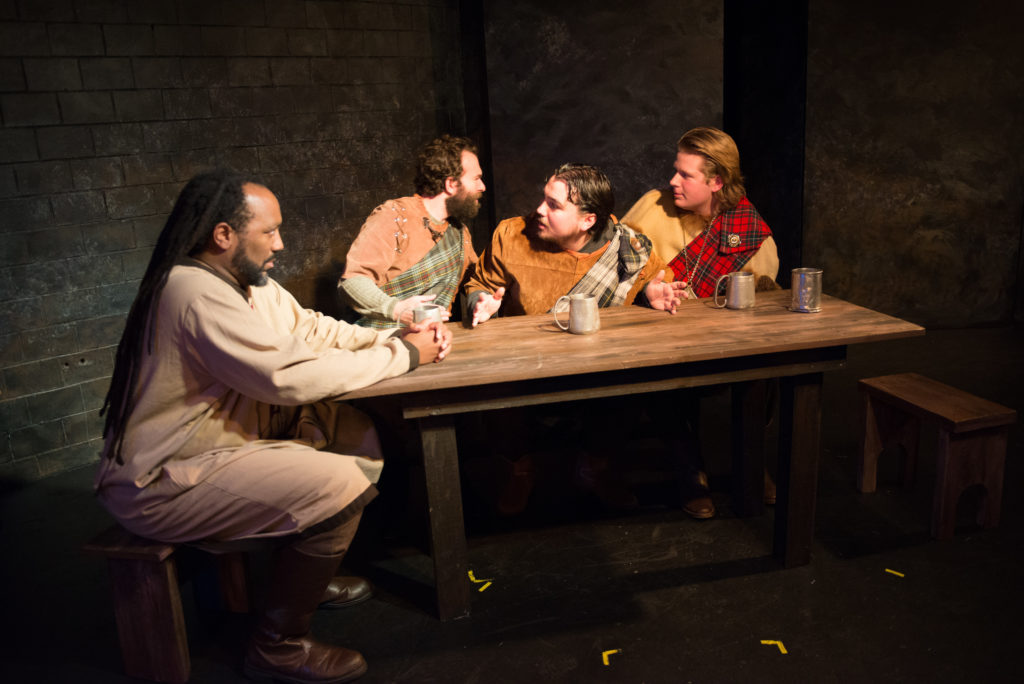 Banquo’s ghost haunted the Cellar throughout the run of last season’s Macbeth. Photo by Linda Hogan.

Many people have heard and experienced things in the basement areas, which used to be more than a little bit cluttered and creepy – if you were downstairs with no one else around, you might hear people walking upstairs, and if you were upstairs you might hear loud noises from the basement. Things moved around without explanation, especially a Mountain Dew can that seemed to have a mind of its own and many claimed belonged to co-founder Bill Thomas. In a recent summer production of The 25th Annual Putnam County Spelling Bee, actors heard a loud voice yell out and strange things happened to set pieces on the back deck. The young cast members were frightened, but old timers talked them down.

Though I’ll admit I sometimes moved through basement spaces at night as rapidly as possible, the spirits at the playhouse never frightened me. Four County becomes a home and a family for those who love it and invest time and sweat equity there creating magic, and it must be hard to let it go. So I understand why those old spirits remain, now joined by many more. When I am in the theatre, I feel the spirits of so many dear, deceased theatre friends. I know co-founders Bill Thomas and Lillian Morris are present every opening night, savoring the lingering magic they first created. Our loveable curmudgeon Gene Frisch lives on in every theatre fixture and watches over workdays and set builds. Pat Ohleger sits on the stage edge bellowing, ‘Once upon a time’ as every curtain goes up. Consummate actor and director Mary Brookman continues to empower cast members to be their best selves on and off stage. Musical magic onstage is still conducted by the talented, bighearted Gail Pataky and Barbara Sherman, and the jovial Paul Donohue will keep the spirit alive at every holiday production. The irrepressible Randall Herndon waits to run across the stage brandishing a sword or chased by a bear, and the lovely Tricia Belan, who lit up the stage as Princess Winifred, helps every ‘shy’ actor overcome stage fright. Roger Prine, who spent decades volunteering and had Four County coursing through his veins, watches from the lighting booth and waits around late at night to hang and focus one more light from his tall ladder perch.

Catching a glimpse of the old teacher’s ghost might be thrillingly scary, as is hearing footsteps in an empty hallway; I get the Halloween urge to play it up. But the spirits I feel when I am in the playhouse are the members of my theatre family who left us way too soon. I imagine them holding production meetings when no one else is around, debating play selection, costumes and props, set design, casting options, and most importantly, what to eat for workday lunch on Saturday. I understand why they can’t quite leave the little theatre that brought so much magic and so many wonderful friends and family into their lives. And when it’s my turn to haunt the old building where I spent so many hours, I think I’ll be there painting the stage floor black…again and again…and maybe adding a few speckles just for fun.