Welcome to our guest blogger, ’Rick Gray, whose most recent involvement with Four County Players came during Season 43’s Cellar production of Macbeth. Enjoy his own best four memories of time spent with 4CP.  And send us yours at linda.hogan@woodberry.org!

Now that I’ve finally directed a show at Four County Players, I look back on my twenty-six years of association with our beloved theater through different lenses. Contemplating my favorite memories from those years, one must – inevitably – involve directing Macbeth. But I find that the others which demand inclusion also involve directors who, by their example, taught me important lessons in the craft – years before I ever thought of directing myself:

As a first-time director, I couldn’t have prouder of that cast and crew. The play had grown with every performance, which says a great deal about the character and dedication of the team who did the hard work of bringing this daunting play to life.

It was a moment of letting go, but also one of intense gratitude. We had done something remarkable together, which is, I suppose, what makes theatre so special for those of us who do it. 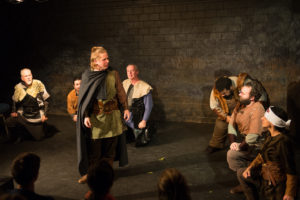 No one really wanted to be there that night. The play was in good shape. So I decided to inject a bit of levity into the proceedings. As the Lord in the play’s Induction scenes, I was among the first characters to speak. I had a number of lines which could take on a very different, highly suggestive meaning – if given an over-the-top, way-out-of-the-closet delivery. So I went for it.

When I dared, I glanced to the back of the “house” to see how our no-nonsense director was taking it. She was laughing out loud.

That night, several other actors also seized the opportunity to try wildly different approaches to their characters. A routine brush-up rehearsal became an opportunity to take another look at characters we thought we knew.

Because our director allowed us to play.

Finally, one night, rehearsing a scene in Scrooge’s office – with Bob Crachit (Keith Neeley) and nephew Fred (Jim McConnell) – I came to the line: “If I had my way, every idiot who goes about with ‘Merry Christmas!’ on his lips should be boiled in his own pudding and buried with a stake of holly through his heart.”

Until that night, I had merely snarled the line, and it wasn’t good.

On a whim, I changed everything. I spoke the preceding lines warmly, while smiling broadly, crossing between the two younger men, and draping my arms affectionately around their shoulders.

Then, on “If I had my way”, I suddenly pinned their necks in the crooks of my arms, pulled their heads to my chest, and growled the line menacingly in their ears.

What I’d found was a large, physical Scrooge – not merely a disembodied voice.

This led to many discoveries. Indeed, my favorite came on opening night, when I made a cross in front of the stage (which was filled with merry carolers and gift-givers). Inevitably, some joker in the first row had his feet up on the stage. I whacked my walking-stick down beside his size-12s and shouted, “Move your feet!”   He hastily complied.

A little kid sitting next to him stared at me, wide-eyed. “What are you looking at?” I snarled at the terrified child. The audience was in stitches.

All because my director gave me the time to discover my Inner Scrooge. 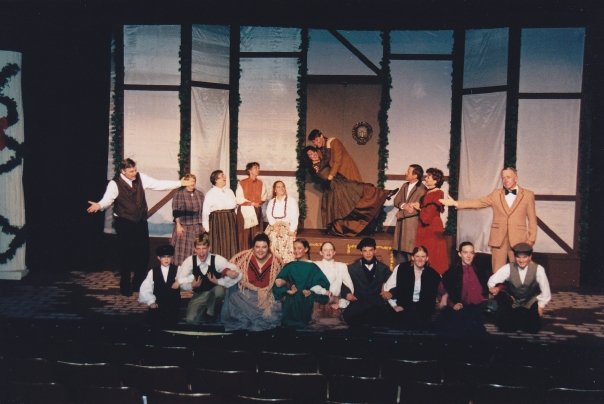 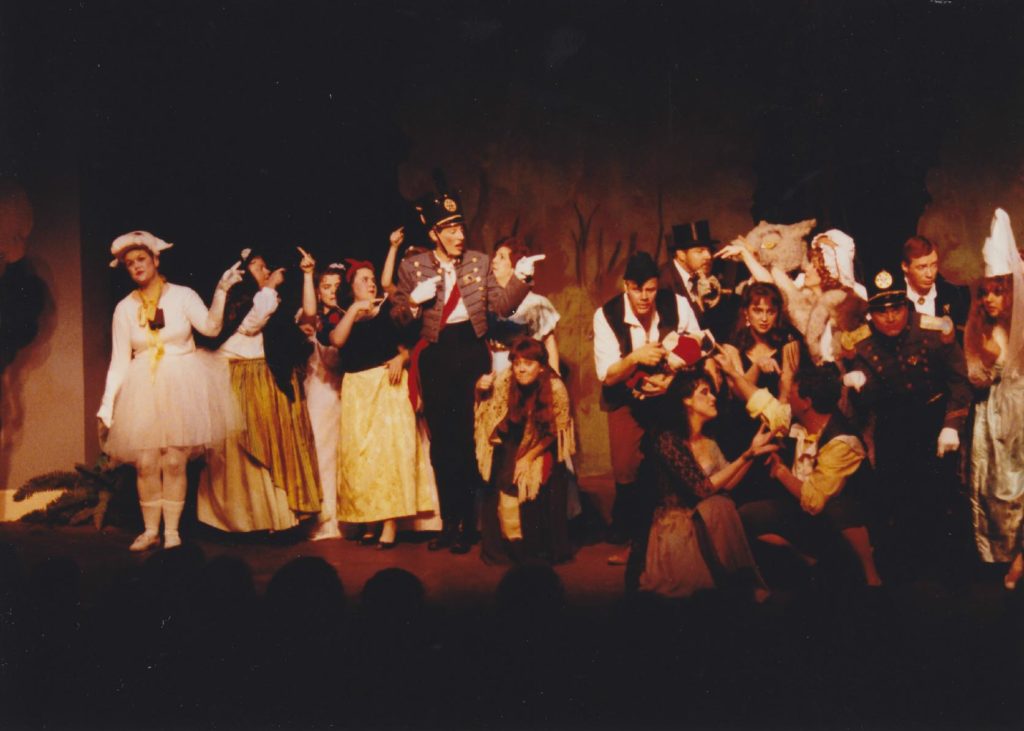 But director Alun Ward created a special touch at this moment – something not in the script. At the very end of the song, the Old Man (Bev Nash) – revealed as the Baker’s father in Act Two – emerged from the upstage group, made his way down into the orchestra, and worked his way between the front row of seats and the stage. As the final song ended, he reached center, turned, and looked up at me – and I knelt down and held out the baby (his grandson) to him.

Got ‘em every time…